Multiphoton intrapulse interference phase scan (MIIPS) is a method used in ultrashort laser technology that simultaneously measures (phase characterization), and compensates (phase correction) femtosecond laser pulses using an adaptive pulse shaper. When an ultrashort laser pulse reaches a duration of less than a few hundred femtosecond, it becomes critical to characterize its duration, its temporal intensity curve, or its electric field as a function of time. Classical photodetectors measuring the intensity of light are still too slow to allow for a direct measurement, even with the fastest photodiodes or streak cameras.

Other means have been developed based on quasi instantaneous non linear optical effects such as autocorrelation, FROG, SPIDER, etc. However, these can only measure the pulse characteristics but not correct for defects in order to make the pulse as short as possible. For instance, the pulse could be linearly chirped or present higher order group delay dispersion (GDD) so that its duration is longer than a bandwidth-limited pulse having the same intensity spectrum. It is therefore highly desirable to have a method which can not only characterize the pulse, but also correct the pulse to specific shapes for various applications in which repeatable pulse characteristics are requested. MIIPS can not only measure the pulse but also correct the high-order dispersion, thus is highly preferable for applications where repeatable electromagnetic field is important, such as to generate ultrashort pulses which are transform limited or possess specific phase characteristics.

The MIIPS method is also based on second harmonic generation (SHG) in a non-linear crystal; however, instead of temporally scanning a replica of the pulse as in autocorrelation, a controllable and varying GDD is applied to the pulse through a pulse shaper. The intensity is maximal when the outgoing pulse is unchirped, or when the applied GDD exactly compensates the incoming pulse GDD. The pulse GDD is thus measured and compensated. By spectrally resolving the SHG signal, GDD can be measured as a function of frequency, so that the spectral phase can be measured and dispersion can be compensated to all orders.

A MIIPS-based device consists of two basic components controlled by a computer: a pulse shaper (usually a liquid crystal based spatial light modulator - SLM) and a spectrometer. The pulse shaper allows manipulation of the spectral phase and/or amplitude of the ultrashort pulses. The spectrometer records the spectrum of a nonlinear optical process such as second harmonic generation produced by the laser pulse. The MIIPS process is analogous to the Wheatstone bridge in electronics. A well-known (calibrated) spectral phase function is used in order to measure the unknown spectral phase distortions of the ultrashort laser pulses. Typically, the known superimposed function is a periodic sinusoidal function that is scanned across the bandwidth of the pulse. 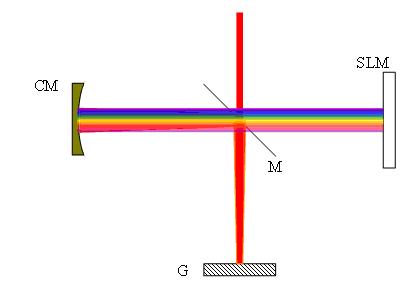 The expanded laser beam reaches the Diffractive grating (G) first, the first-order reflection is deflected to the Mirror (M) and then to the Curved Mirror (CM). The Curved Mirror reflects the laser to the Spatial Light Modulator (SLM). The phases are applied through the Spatial Light Modulator to each component of the frequency. The laser is then retro-reflected. By using a nonlinear medium, the nonlinear (SHG, THG, etc.) spectra vs. the phase scan can be recorded as a MIIPS trace for the characterization of the pulse. Once the pulse is characterized, a compensatory phase can be applied to the ultrashort pulse through the SLM.